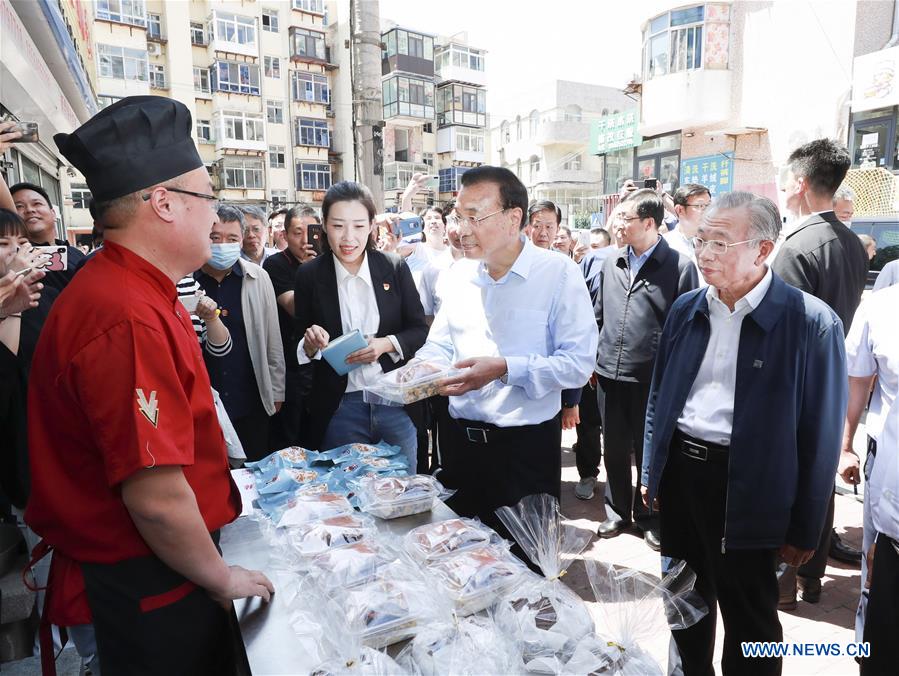 Chinese Premier Li Keqiang, also a member of the Standing Committee of the Political Bureau of the Communist Party of China Central Committee, talks with a stallholder in front of a grocery store on the Dongyuan Street in Yantai, east China's Shandong Province, June 1, 2020. Li made an inspection tour of Shandong Province from Monday to Tuesday. (Xinhua/Pang Xinglei)

QINGDAO, June 2 (Xinhua) -- Chinese Premier Li Keqiang has stressed the importance of providing relief to businesses and stimulating market vitality during his inspection tour of east China's Shandong Province from Monday to Tuesday.

Li, who prioritizes small- and micro-sized enterprises, urged related authorities to properly address the issue of allowing companies to use their intellectual property to secure loans and cut down their financing costs.

The premier called for more ways to increasing credit lines for small and micro businesses to help them solve financing problems.

He also encouraged banks to make appropriate interest concessions, so that businesses can sustain themselves and assure success for the future, which will also benefit banks' development.

In his visit to an old residential community in the city of Yantai, the premier said the renovation of such communities can improve people's living conditions and drive up consumption of home decoration and home appliances. He encouraged social capital to take part in such projects and called for an accelerated pace in renovation.

In front of a grocery store, a stallholder told Li that they all welcome the new policy of allowing them to set up stands as long as traffic is not affected. Li said that if everyone works hard, businesses will survive and grow stronger, and the country will create more space for their development.

After watching a slew of smart products developed by the Haier Group, a leading manufacturer of household appliances, Li encouraged its employees to continue to innovate and asked related government departments to work out reform plans to promote the development of new forms of businesses and create more jobs.

He urged efforts to keep the fundamentals of the economy stable and unfailingly meet the basic living needs of the people.